The Dog and the Bridge

Maybe it’s just because I’m a dog person, but it really makes me mad to see how some humans treat their pets. My social media feed is a constant source of stories showcasing man’s inhumanity to animals, and so it’s not like we needed another example, but sure enough that’s what we got, and this time it hit close to home.

A dog was abandoned near one end of a bridge that crosses a large lake down south where we like to fish. That’s nothing new; locals there tell you that pet dumpers have long been attracted to remote bridges. And that’s probably what happened to this dog, whose human likely drove across the bridge, pulled over and unceremoniously pushed the dog out into the middle of nowhere…and then drove off.

According to Martha Cunningham, the manager at a package store that sits a few hundred yards from the bridge, someone left the female dog over the Thanksgiving Day weekend and she eventually made her way to the nearest humans, which happened to be at the package store. The young lab mix looked like she’d just littered and she also looked undernourished. She had several scrapes and bruises over her torso which made Martha think she may have been thrown from a moving car. Despite this, the dog quickly befriended the store employees and they in turn started calling her Baby.

Unfortunately, the package store sits dangerously close to a busy highway; the cars pass by at 60 miles per hour and Baby sometimes strayed near the road. In my first encounter with her, as I drove off the bridge past the store, I looked over and saw the dog lying in a small grassy strip between the parking lot and the highway. She was lying so close to the highway that at first, I thought the dog had been hit by a car. I was surprised when she raised her head as I drove by.

Although I’d never seen the dog before, I didn’t give it much thought until a couple of days later, when Luisa and I drove back across the bridge and again saw the dog, sitting on the same grassy strip. I slowed down and watch the dog for a moment, and it occurred to me she looked like she was waiting for something, or someone.

During another visit, Martha told us about the generosity of the store’s customers who took an immediate liking to Baby. One customer brought her a kennel and some blankets, and another donated fifty pounds of dog food. Baby showed her appreciation by greeting the female customers warmly, brushing up against them and leaning her head against their legs. She shied away from men, though. At first she wouldn’t let me get within 10 feet of her. After a few visits, she started warming up to me a little but never let me get within arm’s reach, and even then, if I made a sudden move, she spooked, which told me she’d probably been abused.

A few days later, I was passing by, and stopped to check on Baby who was sound asleep on a pile of hay that someone laid against the side of the store for her. It was cooler this time than the last, and I was grateful for the kindness someone showed Baby.

A short time later, the clerk mentioned that the dog couldn’t stay at the store much longer; she’d had some close calls with passing cars and the manager didn’t feel it was safe to let her live outside the store. Early on a few customers offered to adopter Baby, but either she was too afraid of the men or she wouldn’t get into a car. I couldn’t blame her there, after all the last car ride didn’t end so well.

That Sunday, as we drove by the package store on our way back to Fort Worth, we looked over and saw Baby sitting in her usual spot near the highway; unless she learned to trust humans again, she’d likely never find a home. She was running out of time, and as we drove past her onto the bridge, I wondered if we’d see her again.

The following weekend I crossed the bridge anxiously and slowed down to pull into the package store’s parking lot. I looked around for the dog but didn’t see her. We had a cold front coming in that week and I was hoping someone had adopted Baby. I walked into the store and asked the clerk about the dog.

“We found her a home,” she said with a big smile. “An older couple, who live about a mile down the highway, decided to take her.”

I asked how they managed to get Baby into the car and was told that when Baby wouldn’t go near the car, the couple, Joe and Rachel Enderle, decided to walk her home. They managed to get a collar and leash on Baby, and then the 70-year old Rachel simply started walking home with the dog at her side. Turns out it’s only a mile down the highway to their house and Joe followed them in the car. Half way there, they traded places, with Rachel taking the wheel and Joe walking Baby the rest of the way home. You could say it was a team effort.

I caught up with the couple at their home a few weeks later. Luisa and I wanted to stop by and tell them how grateful we were for their taking in the dog. I also wanted to get some photos of them with the lab, whose name they shortened to Babe.

As soon as I arrived at the house, I knew the dog had hit the jackpot. Joe and Rachel lived in a modest but spacious country home, surrounded by five pretty acres of fenced-in land. A small oak grove greeted us as we pulled into the long driveway, and as we neared the house, I saw Babe sitting outside, basking in the warm sunlight of a cool day. I was immediately taken back with how differently she looked. She’d put on a little more weight, but there was something else about her I couldn’t quite put my finger on.

After introductions, we went inside and chatted a bit with Joe and Rachel, who are both retired. Although they don’t drink, they do play lotto from time to time and had gone to the package store to buy lottery tickets and that’s how they came across Babe. They were heartbroken to hear her story and felt terrible that Babe was alone and living outside a store. After some thought, they decided to adopt her.

After our chat, we strolled around the property with the dogs in tow (they also have a 15-year old mix named Digger), and it was during that walk that I could see how much Babe had taken to her new family. A few weeks ago she was nobody’s dog, seemingly defeated and relegated to the side of the road, waiting for humans who weren’t coming back.

Now a few weeks later, here she was walking side by side with Rachel and Joe, looking like a completely different animal. A new home and a new family. The couple went looking for a lottery ticket but it was Babe who hit the jackpot. Now she sat there, next to the Enderles, and looked happy and at peace. In other words, she looked like she was finally home. 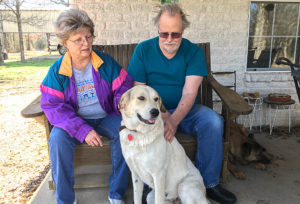